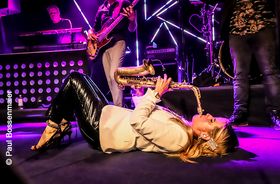 Dutch saxophonist Candy Dulfer has earned her place in music history - with her Grammy-nominated debut album Saxuality, combined worldwide sales of over 2.5 million copies of her solo albums, sensational performances with the greatest  names in music, several number 1 hits in the USA, and her worldwide concert tours and legendary live shows.

She rose to fame with high-profile collaborations with Dave Stewart (the worldwide number 1 smash "Lily was here") and of course Prince - including his "Partyman" video, the record-shattering Musicology Tour and  their performance at the Grammy Awards with Beyoncé. Candy was also fortunate to work - both in the studio and on stage - with many other music legends, including Van Morrison, Maceo Parker, Sheila E., Mavis Staples, Lionel Richie, Pink Floyd, Chaka Khan, Aretha Franklin, and many others.

Despite these amazing collaborations, Candy always focused on her solo career, wanting to stay true to her love for funk, jazz and - above all - live performing, carrying on the legacy of her father, famous saxophonist Hans Dulfer. A female artist who has managed to stay truly autonomous throughout her career, Candy has been touring the world virtually non-stop for the last 35 years. Her live performances are unforgettable, always exciting, and her bands always feature the worlds’ best musicians.

In 2021 she will play clubs and festivals around the globe with an updated band line-up, including long-time collaborator and producer Ulco Bed (guitar) and the return of fan-favorite Roger Happel (keyboards & vocals), as well as putting the spotlight on upcoming talents like 20-year-old drum sensation Kick Woudstra. Together with the rest of the band they will bring the house down with refreshed versions of Candy-classics, as well as the very first public performances of brand- new songs from Candy Dulfer’s upcoming album, which she will continue to work on for its release in the Fall of 2020.